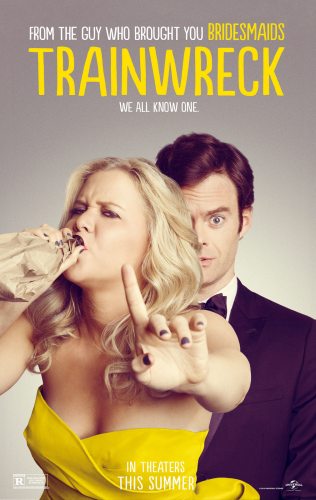 When I tried to describe Trainwreck (now in theaters) to a coworker it came out like “This girl (Schumer) is kind of, well, a train wreck. She drinks and gets high all the time while having a lot of random hook ups until she meets this guy (Hader) that she really likes.”

And then my coworker was all “So it’s a romcom.”

I flinched, not just because technically that is what it would be categorized as, but it really does not deserved to be in the same list as movies such as 27 Dresses or The Ugly Truth or anything starring Katherine Heigl or Patrick Dempsey. Where most romcoms are Hollywood cut and paste stories with characters that are defined by characteristics as being too “uptight” or “loose” until they meet the one in a serendipitous moment and ends in a wedding, Trainwreck distinguishes itself almost immediately with its head writer and leading lady: Amy Schumer. (Also, the gift that is Lebron James’s comedic acting career.)

A lot of Schumer’s comedy is self deprecating. On her show, there are brilliant sketches like her 12 Angry Men sketch, where the jury is debating whether Schumer is “fuckable” enough for television. And while Schumer, at the end, is acquitted with all of the men coming around to say that they probably would sleep her, she definitely isn’t the starlet that we are used to seeing as a romantic lead. (Which, honestly, is a welcome break. Because if Heigl can’t get a boyfriend, what hope do I have?)

Most romcoms star someone like Katherine Heigl, a woman so drop dead gorgeous that she needs one or two over the top personality traits (usually overly neurotic or to selfless or (on occasion) she’s just too darn clumsy (like that’s a character flaw)). In Trainwreck, Schumer’s flaws (alcoholism, addiction, and self-loathing and fear of commitment through anonymous sex) are all realistic and, more importantly, not romanticized, glamorized, or used strictly for comic relief.

Don’t get me wrong, a lot of the situations her addictions put her in are humorous, but the addiction itself not the focal point of the humor. There are many moments in the film that her addiction, while not directly addressed, shows many characters uncomfortable with it.

In fact, Hader’s character at one point says that he doesn’t care how much she drinks, but then goes back says it does bother him. And Amy’s turning point is her admitting to her sister that “I know what I am[, an alcoholic]”.

On the surface, the alcoholism and addiction are played off as somewhat charming, but Trainwreck is genius in how it links these problems to Amy’s relationship with her father. Which isn’t so cut and dry as Amy realizing he’s a terrible person and cutting her father from her life, but coming to the conclusion it is okay (and possible) to love someone who is deeply flawed. And in recognizing those flaws (addiction, alcoholism, fear of commitment) in herself, she is able become the person her father never could.

Trainwreck humanizes issues like addiction and does not make that the focal point of Schumer’s character, but admits that the addiction is dangerous and causing a lot of harm to Amy’s relationships with her friends, family, and herself without being preachy or over dramatic. Schumer is able to write what on the surface looks like shallow and gross humor but actually comes from a very smart and sincere place. This movie demands a re-watch, and not just to see Lebron James’s brilliant delivery of some very funny and charming material.

One thought on “Let’s Talk About ‘Trainwreck’”